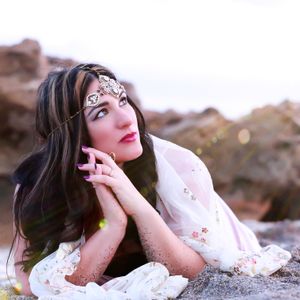 Messianic Recording Artist & author, Michelle Gold, is full of charisma, off-the-wall energy, and a passion, captivating large and diverse audiences all over. She might be the only Jewish girl who has ever won finalist of the McDonald's GospelFest in  NYC, and to win first Runner up for the annual Gospel Music Association competition ( Nashville TN)

“Gold” has opened up and performed before for such legendary singers as Gladys Knight and Jazz legend, Lena Horne after winning the coveted Lena Horne scholarship. While obtaining her Classical Voice degree at Manhattan School of Music, Michelle was exploring a future in secular music w/ top management offers and record company interviews.

However, at age 15, while searching for fame and happiness at her cousin Steve’s music studio in FL, she found her Messiah instead! Steve told her that Yeshua, the Jewish Messiah, is the God and Father she had always been searching for. Her new-found faith compelled her to leave her secular music career behind & to sing a new song to the Lord!

Soon after, Michelle’s eyes were opened to the healing power of God through music in all the new places she would go. She had the great honor of opening for Integrity Records artist, Paul Wilbur in NJ & in FL for countless new and not-yet believers. The Lord also presented her with the opportunity to minister to the surviving families of firefighters who lost their lives in the World Trade Center Tragedy. This took place at St Patrick’s Cathedral & she was also able to minister in song for former NY mayor (now attorney for our president) Rudy Giuliani, who was in the audience that day.

Michelle fell in love with  & married her young adults ministry leader, Minister Joe Franco, in 1999, and together, they toured theUnited States, Denmark (sponsored by the Danish Israeli Mission), El Salvador (sponsored by World Vision), France, Germany, England, and Israel, sharing the hope they have found along with Michelle’s unique story as a Jewish Believer. Joe introduced Michelle to her Jewish roots as a believer, they passed on everything they learned as youth leaders, and later, the Lord blessed them with 2 beautiful children, Bella and Micah.

As a first-generation Jewish Believer in Yeshua, Michelle Gold, aka: the little Jewish girl from Brooklyn, has been blessed to share her music & testimony on the nationally televised TV Program, the 700 Club (CBN) and most recently, on Sid Roth’s “IT’S SUPERNARAL” (Discovery Channel) Gold is currently recording her third  solo studio album and has created a testimonial Book, and audiobook highlighting life’s lessons in the midst of struggle, called, “FINDING GOLD (sold on Amazon)

Michelle says, “My vision is to awaken a contagious passion for Yeshua (Jesus)  in the hearts of all people from every nation. Like Esther, I want to bring (carry the message of) salvation, hope, & healing  to my people FOR SUCH A TIME AS THIS.